Everyone loves a lover, especially around the commercial confection that is Valentine’s Day. Here are some of my favourite, ah, less-conventional star-crossed lovers: 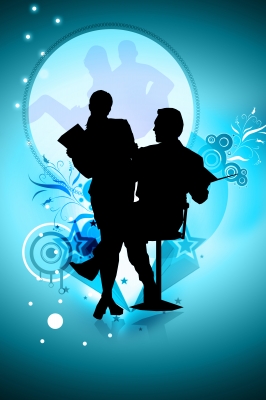 9. Waldo Jeffers and Marsha Bronson. He’s a love-sick youth who mails himself in a large cardboard box as a surprise. She’s the girlfriend who slices the box open with a sheet metal cutter. Oops. (‘The Gift’, a track on White Light/White Heat, the second album by The Velvet Underground. The deadpan narration is by John Cale.)

8. Jupiter and Semele. He’s the king of the gods. She’s human. Trouble is, Jupiter is married to Juno, who tricks her husband into killing his mistress by appearing in his full divine power, which no mortal can withstand. ‘Jupiter and Semele’, a masterpiece by the French Symbolist painter Gustave Moreau.

7. Ghörg and Mrs. Ghörg. He’s a heavily-armoured warrior demon who once every lunar cycle is summoned to the human world to hack and slash and dismember dozens of foes. She’s the love of his life, and he’s promised to get home early to the fifth level of hell so he can lay the table for dinner. (Les Forêts d’Opale – a bande dessinee by Arleston and Pellet.)

6. Death and Donna. He’s Edward, a merciless and sociopathic bounty hunter known as ‘Death’ by the vampires and werewolves he stalks. She’s an ordinary widow with two kids in Santa Fe who thinks that her new lover is just a good ol’ boy. Bizarrely, it seems to work. Laurell K. Hamilton’s ‘Anita Blake: Vampire Hunter’ series of novels, especially Guilty Pleasures and Obsidian Butterfly.)

5. Wash and Zoe. He’s a happy-go-lucky spaceship pilot with a penchant for wacky digressions. She’s a hard-as-nails disillusioned veteran of an interplanetary civil war, whose marriage to Wash was forbidden by her captain (and current boss). They’re pursued by cannibals. Tears are shed. Firefly – TV series, and Serenity.

4. Oskar and Eli. He’s lonely and bullied. She’s a vampire trapped in the body of a 12-year-old. Snow falls. Body parts are separated from bodies. It’s heartwarming. Let the Right One In – film, based on the novel by John Ajvide Lindqvist.

3. John Connor and Cameron. He’s a confused rebel who knows he’s going to grow up to lead the human resistance against the machines. She’s an all-killing Terminator sent back from the future to protect him, subverting human expectations by looking like a petite teenager. When John gets a girlfriend, the robot gets jealous. As they do. The Sarah Connor Chronicles – TV series, part of the Terminator universe.

2. Mina Harker and Alain Quatermain. She’s the sharp-tongued victim of a Dracula attack. He’s an elderly drug-addicted explorer. A dip in a pool of rejuvenation means they can shag and bicker for the next hundred years. Now that’s an enduring romance. The League of Extraordinary Gentlemen series of graphic novels by Alan Moore.

1. Tara and Willow. Tara’s a shy, introverted witch who develops into a rock of moral fortitude. Willow’s one of the most powerful magical practitioners on the planet, and almost brings the world to an end. Honestly, if you didn’t cry when Tara was murdered, you’re made of stone. Buffy the Vampire Slayer – TV series.