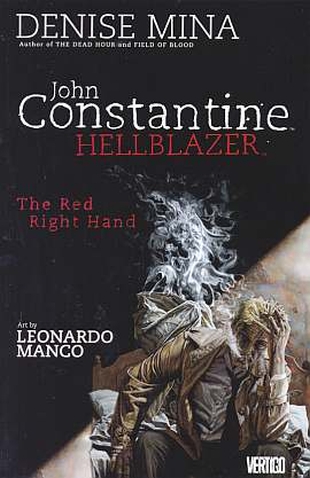 Anyone interested in great writing should pop along to the Steps Theatre in Dundee’s Central Library on Thursday night (May 19th), because the splendid Denise Mina is giving a talk. I will most certainly be there.

Denise Mina is primarily known for her bestselling crime novels set in Glasgow, and I’m very fond of one of her unconventional heroines, investigative journalist Paddy Meehan. But my fanboy sense is tingling because she has also penned two graphic novels featuring Hellblazer himself, the man with the trenchcoat, permanent fag-end and surly attitude – occultist John Constantine.

Since making his appearance in Alan Moore’s version of Swamp Thing in the 1970s, John Constantine has been one of the most fascinating of comics characters, a working-class former punk who looks like a degenerate Sting, makes as many mistakes as he does right moves, and spends his time in magical conflicts with demons, angels and other nefarious beings.

Denise Mina brought the London-based Constantine to Glasgow in Empathy is the Enemy and The Red Right Hand darkly puckish tales of misery-eating demons and grim apocalyptic cults. The climax in the Kelvingrove Museum and Art Gallery is a classic. I mentioned the graphic novels in The Guide to Mysterious Glasgow and The Guide to Mysterious Iona and Staffa.

Crime and John Constantine – what more could you possibly want from an author event? 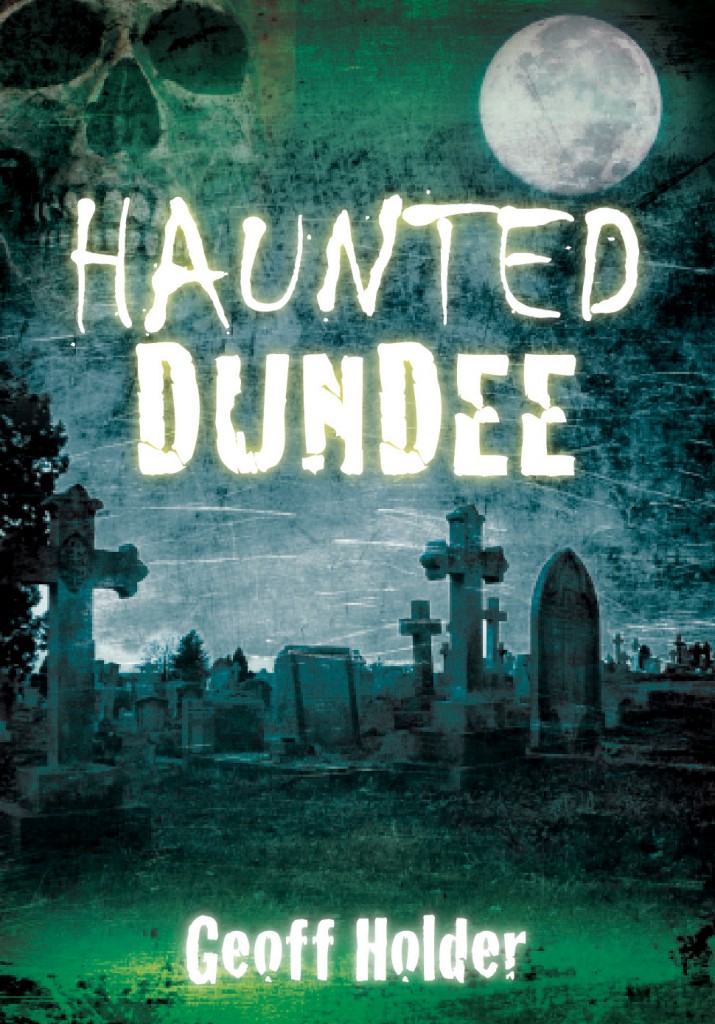 Do You Have A Ghost Story in Dundee or St Andrews?

I am currently writing a book entitled Haunted Dundee. This is a follow-up to Paranormal Dundee and a partner to Haunted Aberdeen, both of which came out in 2010. Later this year I’ll also be working on Haunted St Andrews & District.

So, if you have a personal experience or a family tradition of an alleged ghostly encounter in the Dundee or St Andrews area, I would be interested to hear from you. Just go to the contact form.

I am interested in the full range of phenomena:
Apparitions
Poltergeist activity
Crisis visitations
Anomalous sounds and smells
Communications
Doppelgangers
And any other related incidents, including known hoaxes

Please include all relevant details – what was experienced, when, where, and by whom, plus a way to get in touch.

Not every story can be used for the book, so the more confirmatory details there are, the more likely the story will be considered for inclusion. Vague mails that read something like ‘I saw a goste it was dead scary and real, honest’ will almost certainly not be of interest. Correspondents can be anonymous in the book if they wish. I will not pass your details on to any other person or organisation.

Haunted Dundee will be out in winter 2011, while Haunted St Andrews & District will be published early in 2012.

I look forward to hearing about your experiences, and thank you in advance. Input your ghost story here!. 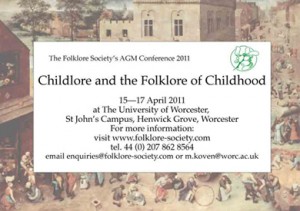 e Annual Conference of the Folklore Society, which took place at the University of Worcester.

With ‘Childlore and the Folklore of Childhood’ as its theme, the event turned up a truly diverse and fascinating set of talks. As a result I now know an awful lot more about Lithuanian horror stories, fairy changelings, the Evil Eye, and, yes, giant Korean centipedes. I love my job.

The organisers put my talk on just before lunch, although happily it appears no-one was put off their food by my tales of the cannibal children of old Dundee town.

The entire event was well organised by Mikel Koven and Caroline Oates, the company was agreeable and joyous, and the collective meals splendid and filled with talk of supernatural guardians, djinns, Japanese subcultures, witchcraft and urban legends. Did I say I love my job?

One of the participants, playwork researcher Marc Armitage, has blogged his thoughts on the conference at www.marc-armitage.eu, while Jeremy Harte’s fulsome conference report is on the Folklore Society’s site www.folklore-society.com.

I’m very pleased to have been invited to give a presentation at the 2011 Conference of the Folklore Society, which is taking place at the University of Worcester on 15-17 April. The Folklore Society is the country’s oldest academic body dedicated to studying all aspects of folklore, folk belief, customs, legend, urban myths and superstition, both historical and contemporary. The theme of this year’s conference is “Childlore, and the Folklore of Childhood”.

I’m appearing on Saturday 16th, bookended by Dr Laimute Anglickiene talking about Lithuanian Children’s Horror Stories and Dr Jurgita Macijauskaité-Bonda discussing Children’s Encounters with the Souls of the Dead in Lithuanian Folklore, both of which I suspect will be amazing. And if that wasn’t enough, my friend (and one of the UK’s foremost folklorists) Jeremy Harte will be waxing entertainingly on Murder in Fairyland: A Social History of Changelings, while there are further talks on witchcraft, the Evil Eye, and the vampire series True Blood. In terms of my sense of anticipation I am, it is fair to say, feeling pretty psyched, as the young people say.

My own contribution is a talk entitled “A Cannibal Child – Just Like Her Dear Old Dad”. Here’s the abstract:

In the fifteenth century a family of cannibals was executed at Dundee. The only member spared the flames was a one-year-old girl. She was fostered by a Dundee family, but as she grew older her inheritance came through, and she started biting her fellow children and licking their blood, eventually progressing onto actual eating morsels she had torn off with her teeth. So when she had reached the age of twelve, she too was executed. She turned to her prosecutors and said, “Why chide ye me as if I had committed a crime. Give me credit, if ye had the experience of eating human flesh you would think it so delicious that you would never forbear it again.”

The paper explores the possible reality (or not) of the tale, examining dubious historical sources, spurious placename evidence, early Christian descriptions of Caledonian cannibalism, anti-Scottish propaganda, Scottish patriotism, and type relationships with two other Scots cannibals, Christie Cleek and Sawney Bean. The tentative conclusion is that the well-known legend of Sawney Bean and his anthropophagic family may have been derived from the Dundee cannibals, who, given the nature of one of the sources, may have actually existed.

But did the infant girl really grow up to be a cannibal just like her dear old dad? This seems more like an agent of storytelling, imported into the tale because that’s the way the story should end. But we’ll never really know.

You can find out more about the conference here!

Many thanks to all the folks who came along to the ‘Hanged By The Neck Until Ye Be Dead’ event at Perth. We had almost 70 people in the audience, and despite the prolix author almost running out of time towards the end (So many murders! So little time!) things went swimmingly.

There were death warrants, gibbets, pools of blood, shotgun blasts and execution sites. The questions were insightful and penetrating, and in some cases even received a sensible answer in return. A nod of appreciation to the Friends of Perth & Kinross Archives for inviting me, and for facilitating the event, and my thanks to the Local Studies Department of the AK Bell Library for providing many of the images used in the talk.

For the next talk, I’m pitching up at the University of Worcester (16 April) to discuss cannibalism in Dundee. Ah, happy days…