Perth Museum has just opened its Dinosaurs Unleashed exhibition, which has some excellent life-size models, including a menacing Megalosaurus. We all know dinosaurs are among the Greatest Hits of Planet Earth, so, in celebration, here’s my top ten dinosaurs in popular culture. 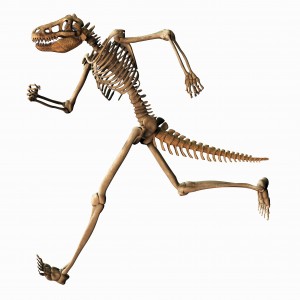 1. Dinosaurs for Hire – Archie (Tyrannosaurus Rex), Lorenzo (Triceratops) and Reese (an eyepatch-sporting Stegosaurus) are muscled mercenaries in New York. They like big guns, hot babes and bad puns, and never use one bullet when a full clip will do. Tom Mason’s ‘80s comic abounds in sly visual jokes and gung-ho references to Schwarzenegger, dumb action movies and the decade that taste forgot.

2. Tyrannosaurus Rex – The thrust of this band’s psychedelic-era twee-folk aesthetic can be summed up in by their album titles such as ‘Prophets, Seers and Sages: the Angels of the Ages’ and ‘My People Were Fair and Had Sky in Their Hair but now They’re Content to Wear Stars on Their Brows’. A big favourite on John Peel’s Perfumed Garden Show, the DJ can be found reading a story about pixies on one of their tracks. After the hippie dream faded, leader Marc Bolan shortened the name to T. Rex, and created a glam-rock monster.

3. Dinosaur Island. – This South Pacific island home to living dinosaurs crops up occasionally in the DC Comics Universe and has been visited by, among others, Batman, Black Canary, Sgt. Rock and a host of WWII marines, submariners and robots. For some reason it cannot be located on Google Earth.

4. The Batcave’s T. Rex. – Batman’s subterranean command centre beneath Wayne Manor is frequently shown with a lifesize T. Rex. The trophy dates from 1946, when the Caped Crusader battled animatronic monsters in a theme park named Dinosaur Island. Jurassic Park, anyone?

5. Doctor Who’s Pterodactyls – In The Wedding of River Song, the finale of Doctor Who Series 6 (2011), where Matt Smith’s timeline gets rather discombobulated, there’s a brief scene in which some kids in Hyde Park are frightened by flying reptiles. As the sign says, Pterodactyls are Vermin – Do Not Feed…

6. Gertie the Dinosaur – Created by cartoonist Winsor McCay in 1914, Gertie is a beguiling brontosaurus who does a little dance, throws a mastodon into a lake, eats rocks and trees, scratches like a dog and sheds tears when she is told off. She originally featured in McCay’s vaudeville performances, where he would interact on stage with the animated creature, finishing by disappearing behind a curtain and reappearing ‘on screen’ with Gertie. The full film can be seen here.

7. Brontosaurus stampede! – The most recent version of King Kong (2005) is a chestbeating silverback of a film, and I love the big ape to bits. But my favourite sequence is the stampede of Brontosaurs through a narrow gorge and along a crumbling edge, pursued by smaller Venatosaurus predators. It culminates in a ‘car crash’ that remains one of the most visceral of modern dinosaur moments. (And yes, I know Brontosaurus has been officially renamed Apatosaurus but then I still think of Pluto as a planet.)

8. Gwangi – Before digital dinos, cinematic seekers after prehistoric thrills had to be content with stop-motion animation. The king of this technique was Ray Harryhausen and I defy anyone who says they can resist curling up on the sofa and enjoying the retro pleasures of watching his animated monsters in The Beast from 20,000 Fathoms or One Million Years B.C.. I have a soft spot for The Valley of Gwangi (1969), especially the scene where Gwangi, an Allosaurus, is lassoed in the Mexican desert. Cowboys and dinosaurs – a marriage made in heaven…

9. The Butterfly Effect – Time-travelling safari hunters down a dying T.Rex as scheduled, but then accidentally kill a butterfly, thereby catastrophically changing the future. Ray Bradbury’s short story “A Sound of Thunder” remains a stone-cold classic of dinosaur science fiction, even if the 2005 movie was entirely inconsequential.

10. The Drowned World – Solar flares have turned Earth into a vast tropical swamp, with the remnants of humanity clustering in the Arctic Circle. In an inundated London, scientists suspect that the iguanas and alligators are reverting back to their prehistoric forms… J.G. Ballard’s cult 1962 novel eschews action for a psychological, internal descent into a world where humanity seems to be willing itself back into its primordial origins. Expect rich and disturbing dreams after reading this most oneiric of apocalyptic visions.