Many thanks to all the folks who came along to the ‘Hanged By The Neck Until Ye Be Dead’ event at Perth. We had almost 70 people in the audience, and despite the prolix author almost running out of time towards the end (So many murders! So little time!) things went swimmingly.

There were death warrants, gibbets, pools of blood, shotgun blasts and execution sites. The questions were insightful and penetrating, and in some cases even received a sensible answer in return. A nod of appreciation to the Friends of Perth & Kinross Archives for inviting me, and for facilitating the event, and my thanks to the Local Studies Department of the AK Bell Library for providing many of the images used in the talk.

For the next talk, I’m pitching up at the University of Worcester (16 April) to discuss cannibalism in Dundee. Ah, happy days…

This article on the Perthshire Murders book appeared in the Scottish Daily Mail on Saturday 19 March. It is reproduced courtesy of that newspaper and the article’s author, journalist Jim McBeth. Please follow the links below, first then second naturally, to view the article in its entirety. Click, open or save, and enjoy! 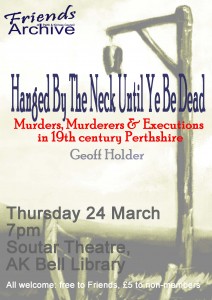 I’m giving an illustrated talk based on my book Perthshire Murders this coming Thursday (24th March).

It’s called “Hanged By the Neck Until Ye Be Dead – Murders, Murderers and Executions in 19th Century Perthshire” and does what it says on the can, being filled with gruesome crimes from Georgian and Victorian Perthshire and Kinross-shire, plus a brief history of hangings in the area.

I’ll be covering murders from Perth, Dunning, Birnam and Braco, not to mention the Blairingone Bread Cart Murder. One of the crimes is my candidate for the title of ‘The Oldest Unsolved Murder in Scotland’, while another may possibly have ended in a gross miscarriage of justice. Expect massive blunt force trauma to the head, gunshot wounds, and fatal stabbings. The talk is not suitable for young children, honest.

The talk kicks off at 7pm in the Souter Theatre at the AK Bell Library, York Place, Perth PH2 8EP.

Tickets are £5 on the door (unless you’re a Friend of Perth & Kinross Council Archives, in which case admission is free). I’ll be selling and signing copies of Perthshire Murders and all my other books. You should come along!