called DIETRICH BONHOEFFER, and deals with the titular character’s resistance to Hitler from within Germany. 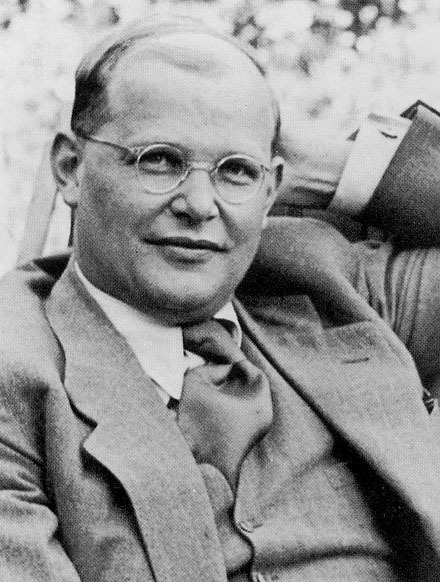 theologian from a comfortable upper-middle-class German family. If the Nazis had not come to power Dietrich

would have spent his life as a respected but obscure university professor in Berlin. As it was he resisted Hitler for

an amazing twelve years, firstly by attempting to prevent the Nazification of the German Protestant church, and

eventually playing a minor part in Operation Valkyrie, the German plot to assassinate Hitler. He ended his life in a

concentration camp just weeks before the end of the war.

To tell the story I’ve used a mix of history and humour, with a James Bond joke, a Terry Gilliam reference and even Adolf Hitler going door-to-door with a collecting tin: “I wonder if you’d consider supporting the Nazi party? Our

policies are the extermination of the Jews and the Gypsies, the subjugation of the whole of Europe and the

enslavement of lesser races. No? Perhaps you’d take a leaflet?…”

Writing the script was a powerful experience, mining Dietrich’s amazing life for episodes that could be used

visually and to show the humanitarian principles he stood for. I’ll confess to in being tears sometimes, especially as I was writing the last pages.

this opportunity. Pending funding, the film will go into production in 2015.

Well chuffed to note that I’ve been commissioned by The Lives of the Dissidents project to write the script for a 10-minute animation about Dietrich Bonhoeffer, the German Protestant pastor who resisted Adolf Hitler and after a

long imprisonment was eventually executed by the Nazis  in 1945. Other films in the series will highlight others who resisted state power, such as Martin Luther King, Victor Jara and Sophie Scholl.

This is the first time I’ve scripted an entirely animated film. Once the script is complete, the animation is scheduled to go into production in 2015.

Now I’m going to celebrate with a nice cup of tea.